After 5 short years since the Sandringham Hotel was saved from receivership; and 3 years since the upstairs bandroom has been in business; the doors to the Newtown Social Club closed forever. Holding a capacity of 300, the NSC allowed local groups to earn their stripes and encouraged interstate groups to visit Sydney.

Gareth Liddiard’s sold-out afternoon and evening performances – supported by Ela Stiles – is quite fitting of a solemn vigil.

Beginning the proceedings was Ela Stiles seated in front of a harmonium, her miniature pipe-organ exhales an elongated drone while she sings ethereal chants. The feeling is almost spiritual in a sense, projections of clouds steadily moving across a blue sky fill a backdrop. Meditatively, I envision my mind being filled with a glass of cool water and half an hour passes suddenly.

At no less than a minute past 8:30, Gareth Liddiard makes to the stage. “The tuner’s not working,” he exclaims to a captive audience. Laughter can be heard all around. Continuing this thread, Liddiard makes small talk while quickly tuning, using the opportunity to jokingly disclose that there is no difference in the afternoon and evening sets to the few fans attending both.

Liddiard’s set consists mostly of tracks from his 2010 solo record Strange Tourist, beginning with ‘Blondin Makes an Omelette’, the calm plucking of steel strings and the smooth yet strained vocal delivery of Liddiard filling the room with unease. As he lifts, he strikes each string successively louder, the sharp twang and crack of strings grow pronounced and clear, the callous instrumental sections strongly lending to his harsh folk rock tone. 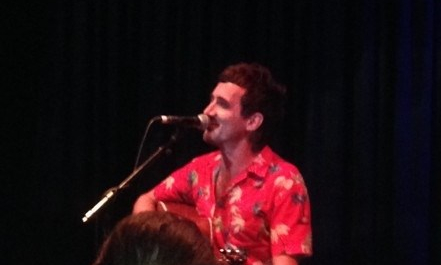 Much of the audience is fascinated by the singer-songwriter; Gareth isn’t afraid to exhibit his light-hearted yet crude sense of cynicism about world media and speculative thoughts of a World War III in-between songs. While many seemed dismayed by the closure of the Newtown Social Club, he focuses on the destruction of Sydney at the hands of a North Korean nuke and admits that it would be great material for himself to sing about – this is his job of course.

Of his solo material, ‘Highplains Mailman’, ‘Strange Tourist’ and ‘Did She Scare All Your Friends Away’ were highlights of his live show. Many of these songs were matched with personal anecdotes for each song. Before performing ‘Strange Tourist’, Liddiard reveals he had worked in a hospital with his girlfriend and witnessed a comatose man. As the audience listens, he gradually unravels his lyrics, revealing a far sadder story.

Many of The Drones’ songs are scattered throughout the set, notably ‘Shark Fin Blues’, ‘Sixteen Straws’ and ‘Oh My’. During the latter, he pauses after the opening ‘people are a waste of food’ and it’s not surprising that during his second set, visibly calm yet inebriated on spirits; and given the wide lyricism of his works; that Liddiard might forget the words to a verse. Audience members are quick to show a helping hand by shouting out lyrics, Liddiard finally acknowledges the mistake and continues on with the audience joining in chorus. He later jokes calmly before performing Lou Reed’s ‘Oh Jim’ and ‘My Shit’s Fucked Up’ by Warren Zevon, that it is easy to remember the words of others.

Liddiard signals the end of the show with ‘Taman Shud’, musing the off-chance that his next solo return to Sydney could be at a golf club.

View all posts by melodymenu

One thought on “Gig Review: Gareth Liddiard at the Newtown Social Club”

The best things in life are
free music and food.