We were lead to Cobden Chambers, Nottinghamshire, by a slightly startled passer-by we had just accosted on the street. He was holding a bag for Forever Records, a place that we had just been told by Rough Trade staff was Nottingham’s best independent record store. He regarded us warily – I suppose people don’t really interact with strangers around here – but once he registered what we were asking for, he smiled and pointed us in the direction of one of Nottingham’s many fabulous little nooks; a bright and sunny laneway charged with creativity. A world away from Nottingham’s busy main streets flecked with buses and trams and general hubbub, Cobden Chambers was a place where friends and family could eat in the sun on long communal tables among pot plants and fairy lights and beautifully-painted murals. A world of colour, creativity and community.

Much like the Chambers, Forever Records was a light-filled and inviting space. Far from what we expected a record store to look like, the shop felt full of energy, with brightly coloured art and more pot plants. As we dug through the crates, Low Life’s debut LP glared at us from its display on the wall, prompting a feeling of international interconnectivity in music, and a pride for Australian bands doing it for themselves.

It felt wondrous that a seemingly obscure album could make it to this seemingly obscure location in the UK. Forever also boasted the largest local music section we came across in our whole trip, a veritable cornucopia of bands that would be regular sights at venues such as the Rescue Rooms, where we would be seeing Paul Kelly that night. With our stomachs grumbling however, we left empty-handed but all the richer for experiencing the energising store.

We turned to leave Cobden Chambers in search of food, but not before we were waylaid by the promise of a bookstore further down the lane. Where Forever Records was alive with red accents and greenery, Ideas on Paper was whitewashed and quietly inspiring. Upon entering, our keen-eyed salesman, with a certain proprietorial prowess, deftly recommended us several titles based on the first book that we picked up – all while negotiating with suppliers on the phone. With this pile of books in tow, we were left to gaze at the walls, which were lined with books and magazines waiting patiently to be picked up and poured over. We quickly discovered there was no rhyme or reason to their display, no individual ‘food/wine/travel/literature’ sections, but pleasantly-displayed chaos. The owner, now off the phone, told us that this was how he liked it best – a means in which for people to find titles and topics on their own, possibly happening upon something they hadn’t expected.

We left Ideas on Paper £50 pounds lighter and several books heavier, almost confused at how we had accrued so many eclectic titles so quickly. As a parting gift, the owner offered us a recommendation of the café next door. He told us of their intriguing take on Middle Eastern food and how they were not often open, so that it was perfect that we had visited the Chambers that day. 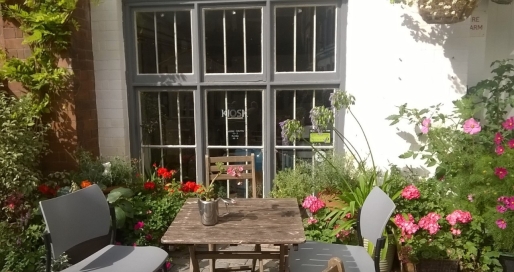 As soon as we stepped into Kiosk and eyed the stodgy, multicoloured salads dripping from the front counter, we were glad we did. We sat beneath a large chalkboard announcing events taking place in the café, which also turned out to be a creative hub made up of freelance work spaces, yoga, mindfulness and historic talks on Nottingham. The people next to us were even conducting a literary job interview. But in retrospect, it was surprising that we noticed anything other than the food. The food that disappeared so quickly that I was only able to take a photo of our empty plates.

We ordered the ‘Rustic Middle Eastern roast chicken’ and the Kiosk Salad Plate, a collection of those amazing salads piled high on the counter. The former was a slow-roasted chicken leg, the likes of which I’d never tasted. It simply melted off of the bone and into your mouth with garlic-glazed bliss. Paired with pomegranate and rice, it was fresh, filling food that was utterly revitalising. The salads – roast butternut squash with fragrant rice; chard, kale and apple; and simple leafy greens with pickled cherries and tahina dressing; all topped with hunks of crusty bread – was the definition of feel-good food. We were told later that the salads were generally made up on the spot, with whatever ingredients they had handy. The proprietress, gesturing to a huge, whole squash to the side of the counter, said the vegetable had been given to her that morning for her to do with what she pleased. We were resoundingly grateful for her ingenuity.

With slabs of takeaway vegan chocolate cake safe in our backpacks, we floated out of Cobden Chambers late for our next appointments, but raring to cook, create, make, and take just a little slice of Nottingham – and all that we had learned there – with us back to Sydney. 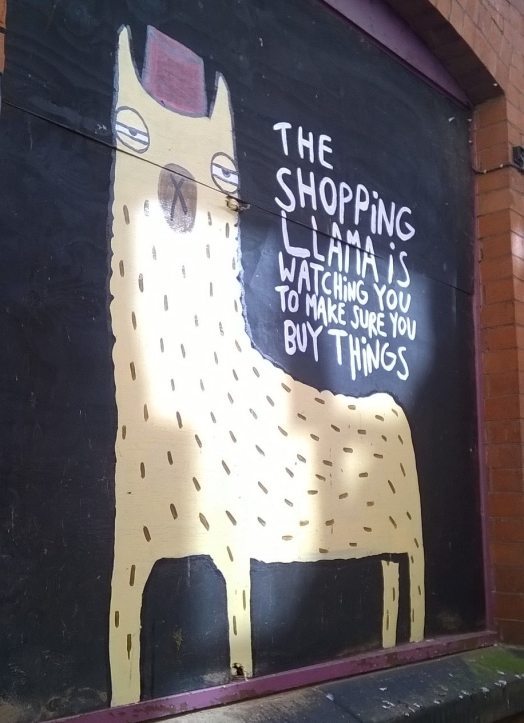 View all posts by melodymenu

The best things in life are
free music and food.